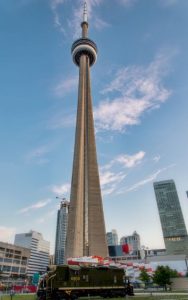 When I consider a higher view, I’m reminded of my visit to the C.N. Tower in Toronto. Overlooking Lake Ontario stands this tower which is the world’s tallest building and free-standing structure (1,815′ or 555.3 meters high). We took the glass elevator up to the 360 degree observation deck. Not only is the panorama of the city and beyond breath-taking; there is also a glass floor in the observation gallery on which visitors can stand and gaze 1,122′ straight down. What a view!

Why is it so fascinating to get a higher perspective? Could it be that we get accustomed to the ordinary appearance of our surroundings and lose sight of the larger scene? Even familiar locations seem different when seen from a higher elevation.

For example, some of our neighbors moved to a rural area and now enjoy the open space and several acres of land. One day they saw a small plane flying around overhead. The reason for this flight became apparent later when a pilot/photographer showed up at their door. He had a large aerial picture of their house and property that was taken from his plane. They were willing to part with some cash to purchase that unique picture which henceforth was framed and displayed in their home. For them, the higher view was worth it.

In a similar way we need a higher view in the Christian life. How easy it is to become short-sighted in our walk and lose sight of God’s ultimate purpose. This higher perspective is based on God’s revelation:

A higher view of redemption

A higher view of sanctification

We also see the need for progressive sanctification growing in experiential holiness as Christ lives His life through us (1 Thess. 4:3-5,7). This culminates in glorification at Christ’s Second Coming, the final installment in our redemption. As the apostle John declared,

“Behold what manner of love the Father has bestowed on us, that we should be called children of God! Therefore the world does not know us, because it did not know Him. Beloved, now we are children of God; and it has not yet been revealed what we shall be, but we know that when He is revealed, we shall be like Him, for we shall see Him as He is. And everyone who has this hope in Him purifies himself, just as He is pure” (1 John 3:1-3).

A higher view of glorification

“[This] fellowship of the mystery, which from the beginning of the ages has been hidden in God who created all things through Jesus Christ; to the intent that now the manifold wisdom of God might be made known by the church to the principalities and powers in the heavenly places, according to the eternal purpose which He accomplished in Christ Jesus our Lord.”

Watchman Nee reflected on the importance of glorification:

“We only see history back to the Fall [Gen 3]. God sees it from the beginning. There was something in God’s mind before the Fall, and in the ages to come that thing [the glorified Church] is to be fully realized. God knew all about sin and redemption; yet in His great purpose for the Church set forth in Genesis 2, there is no view of sin. It is as though (to speak in finite terms) He leaps in thought right over the whole story of redemption and sees the church in future eternity, having a ministry and a (future) history which is altogether apart from sin and is wholly of God. It is the Body of Christ in glory, expressing nothing of fallen man but only that which is the image of the glorified Son of Man. This is the Church that has satisfied God’s heart and has attained dominion” [italics added].

A higher view of God’s intention

As wonderful as the Christ Life message is, we must not limit it to relate only to our personal benefits. DeVern Fromke came to realize the need to relate redemption and sanctification to God’s higher purposes. He confessed,

“For almost fifteen years this writer preached the glories of our position in Christ. He emphasized the truth of our identification in the death and resurrection of Christ, which made available to us a victorious walk … Yet, I was, without realizing it, always relating all this to man, to his needs, and to his welfare. It was all for man–what man received through this new position in Christ … Then one day the truth exploded. I realized just how short this was of bringing man to a full and total emancipation from his man-centeredness whereby he could live a whole, new life with a new center of relatedness.” [1]

Since appropriating the abundant life in Christ requires releasing the self-centered life in exchange for “the Christ-life,” it makes sense that our cosmology should also be God-centered.

In his book, Ultimate Intention, Fromke identifies the threefold purpose God the Father had for the Son from before creation:

This perspective raises us to a higher view of God’s plan. When missionaries with New Tribes Mission begin teaching the chronological Bible lessons to an unreached tribal group, they start by presenting a picture of planet earth. By showing the higher view of God as Creator and the world as His handiwork, the foundation is laid for unfolding the story of the Fall, the Old Testament covenants and eventually the New Testament gospel of Christ. This higher view facilitates evangelism; it also facilitates the believer’s surrender to a God-centered perspective for living. [3]

Gaining a higher view of God’s purposes isn’t as simple as hopping onto an elevator. It takes the “wings of worship” to renew our mind and adjust our perspective. In this way, we can appreciate the scope of God’s gracious, ultimate intention.

Let us join Paul in such a prayer:

“that the God of our Lord Jesus Christ, the Father of glory, may give to you the spirit of wisdom and revelation in the knowledge of Him, the eyes of your understanding being enlightened; that you may know what is the hope of His calling, what are the riches of the glory of His inheritance in the saints, and what is the exceeding greatness of His power toward us who believe, according to the working of His mighty power which He worked in Christ when He raised Him from the dead and seated Him at His right hand in the heavenly places, far above all principality and power and might and dominion, and every name that is named, not only in this age but also in that which is to come. And He put all things under His feet, and gave Him to be head over all things to the church, which is His body, the fullness of Him who fills all in all” (Eph. 1:20-23).

God answers this prayer by enlightening you to this higher view, an expanded vision of what life is all about.