A Man in Heaven and Christ in You

“Now when they heard these things, they were cut to the heart, and they gnashed on him [Stephen] with their teeth. But he, being full of the Holy Spirit, looked up stedfastly into heaven, and saw the glory of God, and Jesus standing on the right hand of God, and said, Behold, I see the heavens opened, and the Son of Man standing on the right hand of God. But they cried out with a loud voice, and stopped their ears, and rushed upon him with one accord; and they cast him out of the city, and stoned him: and the witnesses laid down their garments at the feet of a young man named Saul. And they stoned Stephen, calling upon the Lord, and saying, Lord Jesus, receive my spirit. And he kneeled down, and cried with a loud voice, Lord, lay not this sin to their charge. And when he had said this, he fell asleep.” (Acts 7:54-60). 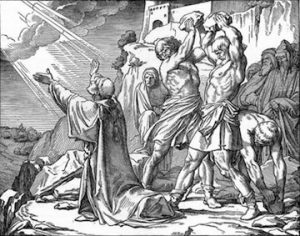 It is wonderful that the first man to be a witness unto death in the Christian era should be the embodiment of all the great spiritual truths of Christianity. It is as though the Lord placed right at the beginning of the dispensation a representation on this earth of those great spiritual realities.

The two great basic features of living Christianity are here definitely set forth. Those two things are

Stephen saw Jesus standing on the right hand of God. He said: “I see the heavens opened, and the Son of man standing on the right hand of God.” That is the Man in heaven! Then as to Christ in you, the Word says: “He, being full of the Holy Spirit…” This is a fulfilment of the words of the Lord Jesus in the Gospel of John: “If I go not away the Comforter will not come unto you; but if I go, I will send Him unto you” (John 16:7). It is by the Holy Spirit that the Lord Jesus is in us.

Those are the two major features of a living Christianity. They are two things which have opened up into two of the great doctrines of Christianity: Christ glorified, Christ in the presence of God, the Man in the Throne and all that that embodies and represents; and, on the other hand, the indwelling of Christ by the Holy Spirit. Everything in a living Christianity is gathered into those two things; you cannot get outside of them. It is marvellous that the word is used: “He… saw… Jesus” (v.55). This man whose name is mentioned for the first time at the end of this chapter, Saul, not so long afterwards had a similar vision. “I am Jesus,” said the glorified Lord to him on the Damascus road.

Satan thought he had triumphed absolutely when he succeeded in turning the first Adam away from God’s purpose, a Man in the glory, but this speaks of the absolute triumph of the Lord over what Satan thought to be his triumph. This is God’s answer: Jesus as the Man in the glory!

Then how will He bring the many sons to glory? “Christ in you, the hope of glory.” So that to be filled with the Spirit becomes necessary to the very purpose of God. Notice the effect in this model case! A Man in the glory, the Spirit filling, an instrument mirroring that Man in the glory. They looked upon his face, and it was as the face of an angel. Then: “Lord, lay not this sin to their charge.” Is not that the character of the Man in the glory reproduced? Is not that conformity to the image of God’s Son?

It was in the time of suffering, pain, opposition, antagonism, hatred, malice, bitterness. What a difference in these two pictures! On the one hand: “They gnashed on him with their teeth.” That is one picture of the fangs of a beast uncovered. On the other hand: “His face… the face of an angel” (Acts 6:15). What a contrast! What religion can do, and what Christianity can do! What tradition can do, and what revelation can do! This truly is what Paul meant when he said, later than this: “We… beholding as in a mirror the glory of the Lord, are changed into the same image from one degree of glory to another.” That word “beholding” in the Greek is a much richer word than our English word; it is a combination of two ideas. It is beholding and reflecting, and there is only one word in the English which gets near it, and it is “mirroring.” That was Stephen. He beheld, he reflected, because he was filled with the Spirit.