A Matter of Death and Life

In a Christian music video, “Watch the Lamb”, there are some dramatic scenes accompanying this song that portray the story of Simon of Cyrene (Mark 15:21). He has walking into Jerusalem on Friday morning and found himself on the Via Dolorosa (the route to the place of crucifixion). As the Gospels record, Jesus–weakened from the torture of scourging–collapsed beneath the cross He was carrying to Golgotha. A Roman soldier pressed Simon into service in order to carry His cross. The video shows some of Jesus’ blood smeared onto Simon’s cheek as he carried the cross behind the Lord. What a picture of Christ’s call to discipleship: “If anyone desires to come after Me, let him deny himself, and take up his cross daily, and follow Me” (Luke 9:23).

If we desire to take this commitment seriously, it isn’t long before we discover that “carrying the cross” is not what our natural desires would choose. Sin does not easily loosen its grip, even though we have been saved and adopted into God’s family. 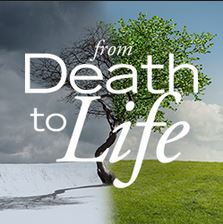 A typical strategy to live as a committed disciple is to try harder (like the Avis rent-a-car slogan). Although well-intentioned, this eventually leads the believer to the frustration described in Romans ch. 7:

“For I know that in me (that is, in my flesh) nothing good dwells; for to will is present with me, but how to perform what is good I do not find… For the good that I will to do, I do not do; but the evil I will not to do, that I practice. But I see another law in my members, warring against the law of my mind, and bringing me into captivity to the law of sin which is in my members. O wretched man that I am! Who will deliver me from this body of death?” (Rom. 7:19,23,24).

F. J. Huegel gave us helpful insights as to why self-effort doesn’t pay off in this quest for obedient living:

“‘Self’ cannot overcome ‘self.’ Sin is too much the soul of our very ‘makeup’ to be overcome by ‘self-effort.’ We become proud of our imagined humility. Our very victories–we no sooner have them than they plunge us into deeper defeat. It is like pulling one’s self up by one’s bootstraps.Christ has provided something infinitely better. The redemption He wrought on Calvary is no blind alley. It really leads to full-orbed victory. But we must not stop in mid-stream. ‘Self effort’ will not avail, but a recognition of our judicial standing before God as those who have died to sin in the death of our Great Elder Brother, WILL bring victory. This is faith: ‘Likewise you also, reckon yourselves to be dead indeed to sin, but alive to God in Christ Jesus our Lord'”(Rom, 6:11). [1]

So the way to “full-orbed victory” is not self-effort but a deeper experience of the Cross of Christ. Romans 6:6 gives the revelation of the believer’s new standing and identity in Christ: “Knowing this, that our old man was crucified with Him, that the body of sin might be done away with, that we should no longer be slaves of sin.”

L. E. Maxwell taught this truth of identification through the following event from history:

“During the [U.S.] Civil War a man by the name of George Wyatt was drawn by lot to go to the front. He had a wife and six children. A young man named Richard Pratt offered to go in his stead. He was accepted and joined the ranks, bearing the name and number of George Wyatt. Before long Pratt was killed in action. The authorities later sought again to draft George Wyatt into service. He protested, entering his plea that he had died in the person of Pratt. He insisted that the authorities consult their own records as to the fact of his having died in identification with Pratt, his substitute. Wyatt was thereby exempted as beyond the claims of the law and further service. He had died in the person of his representative. There we have the truth of identification in a nutshell. God’s way of deliverance [from the self-life] is through death–through identification with our Substitute in His death and resurrection.” [2]

This new standing breaks the authority of sin in the believer’s life. As the apostle Paul reasoned, “Now having been set free from sin, and having become slaves of God, you have your fruit to holiness, and the end, everlasting life. For the wages of sin is death, but the gift of God is eternal life in Christ Jesus our Lord” (Rom. 6:22-23). Although we still have the flesh, the world, and the devil to contend with, we have the authority and power in Christ to live a life free from habitual sin–a life characterized by righteousness (1 John 2:3-6).

This new standing is a wonderful truth, but there is more. Believers not only have a righteous standing and legal freedom, they have spiritual union with Christ (Col. 3:1-3). This union has made their spirit alive unto God (Eph. 2:1). With this “new man” the governing disposition of the heart of God’s children has been made holy: “For I delight in the law of God according to the inward man” (Rom. 7:22).

The significance of this new spiritual life is described in this episode from Huegel’s ministry:

“… a young lady confessed that her life was a veritable ‘inferno’ because of terrible pride which ruled her heart. She said that in spite of all her efforts to overcome, this thing had reached such a degree that she felt herself getting angry when she saw others happy. What was she to do? I said to her, ‘I am a German. Let us suppose that I no longer wish to be German, but a Frenchman. I struggle. I imitate. I agonize over the role. How far will it get me? Will I ever become a Frenchman? Of course not. But let us suppose: I die and am reborn of a French mother. How different. French attitudes are easy now. Well,’ I explained, ‘that is how Christ takes the pride [and other works of the flesh] out of us. He doesn’t simply tame the monster and then call him humility. He takes our humanity to the Cross… The Redeemer imparts to [believers] a crucified life over which pride has no more power than a flea would have over a tiger… ” [3]

Now we rejoice in our new standing and new spiritual orientation, but what about the inward pull away from righteousness? Where does it come from? In a word, from the “flesh”. As Romans puts it, “For I know that in me (that is, in my flesh) nothing good dwells; for to will is present with me, but how to perform what is good I do not find. Now if I do what I will not to do, it is no longer I who do it, but sin that dwells in me. I find then a law, that evil is present with me, the one who wills to do good” (Rom. 7:18,20,21).

Now this doesn’t mean that we are absolved of responsibility for sinful words and actions. However, it is critical to perceive that our human spirit (the organ of the soul that has the capacity to relate to God) is essentially holy, righteous, and therefore “delights in the law of God.” This is the real you! “He [or she] who is joined to the Lord is one spirit with Him” (1 Cor. 6:17) Therefore, your identity is based, not upon your track record, circumstances, or feelings, but upon spiritual rebirth!

So what is “flesh”? In an ethical context (like Romans ch. 6) it refers to the aspect of our mortal body (accessed by the soul) that contains the selfish programming of thoughts, behaviors, feelings, and affections learned independently of God. “Flesh” is in the believer (until leaving the body at death) but flesh is not the believer’s identity! The indwelling Holy Spirit keeps the flesh in check as we yield to His Holy power (Gal. 5:16,17).

The main condition for us to unleash this power of Christ in us is to reckon as personally true our identity in Christ. “Likewise you also, reckon yourselves to be dead indeed to sin, but alive to God in Christ Jesus our Lord” (Rom 6:11).

This invitation and promise are beautifully presented in the song by Jon Mohr, Steve Green, and Greg Nelson entitled: “Enter In.”

“Nothing chills the heart of man like passing through death’s gate,
Yet to him who enters daily, death’s a glorious fate.
Dearly beloved we have gathered here to be a holy bride
And to daily cross death’s threshold to the holy life inside.

Enter in, enter in
Surrender to the Spirit’s call to die and enter in.
Enter in, find peace within,
The holy life awaits you, enter in.

The conflict still continues, raging deep within my soul,
The Spirit wars against my flesh in a struggle for control.
My only hope is full surrender, so with each borrowed breath,
I inhale the Spirit’s will for me to die a deeper death.

If mourners should lament, then let them weep for those alive,
For only when self-will is killed can my soul survive.

Copyright 2000 by John Woodward. Permission is granted to reprint this article for non-commercial use. Please credit the author and GraceNotebook.com. Scripture quotations (unless indicated otherwise) are from The Holy Bible, New King James Version © 1982 by Thomas Nelson, Inc.