A Picture of Spiritual Rest and Victory (Part 2)

“I am crucified with Christ: nevertheless I live; yet not I, but Christ liveth in me: and the life which I now live in the flesh I live by the faith of the Son of God, who loved me, and gave Himself for me.” Galatians 2:20

…He brought us out [of ‘Egypt’] in order that He might bring us in [to ‘Canaan’]. By Faith we must cross over from our own “wilderness living” and enter into the victory of Christ and His Risen Life. We must follow Him in His conquest.

Israel had been brought out of Egypt and slavish bondage by the blood of the Lamb, but they had not yet entered into God’s desire for them. Even though they were being guarded and guided by God, they bogged down in in the wilderness because of their unbelief. Concerned about their own survival, they kept looking back to the pleasures of Egypt and would not walk forward by faith. They were trusting in their own abilities to please God instead of seeing that in their flesh dwelt no good thing [Rom. 7:18]. God gave them the Tabernacle to vividly set forth the Gospel to them and to reveal the coming Messiah, Jesus Christ. It vividly and powerfully set forth the cross as the way of redemption.

After Moses died, the Lord told Joshua that it was time for them to enter into the Land. They were told to “sanctify themselves” and to follow the ark of the covenant across the Jordan [Josh 3:5]. The Ark is one of the clearest pictures of Christ in the Word of God. In Joshua chapters 3 to 5 there is the account of their miraculous crossing over the Jordan into Canaan. Jordan was at flood stage and was impossible to cross naturally. The priests bore the Ark to the very edge of the river, and as soon as their feet got wet the “waters fled” from the presence of the Lord. John 1:28 tells us that they crossed the Jordan at the exact spot that Jesus was to be baptized years later! Jordan means “spreading judgement” and represents the death that sin deserves. The waters receded all the way back to the place called Adam! The priests took their stand in the center of the river and stayed there until “everything was finished” (Josh. 4:10) and until all the people had passed clean over. God told them to set up twelve wilderness rocks in the midst of the river as a memorial to remind them that their past was buried.

And from the spot where the priests feet “stood firm” they took twelve rocks that were smooth and water washed. They were told to set them up in Gilgal as a permanent reminder that they had passed over into the promises of God, and that the reproach of the flesh had been rolled away. What an amazing picture of “buried with Christ by baptism into His death, raised to walk in newness of life” [Rom. 6:3,4]. They had to follow!! 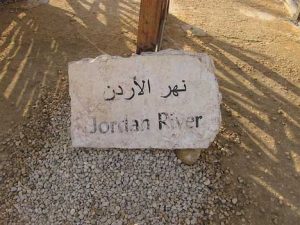 Gilgal would become their base camp for all operations in Canaan … and it stands for the cross in our experience! [Josh. 5:9]. We must keep coming back to the cross! The day that they came up out of the water of Jordan was exactly the same day that forty years earlier they had taken the Lamb into their house to examine it for the Passover! That very same day they immediately circumcised all the males for the first time in 39 years! The application of the knife and fresh covenant marks manifested their intent to be totally obedient in their surrender. Then, after three days of healing, exactly on Passover, they kept the Passover for the first time in 39 years. Calvary time!

That very day the Manna ceased and they began to eat of the fruit of the corn of wheat of Canaan, partakers of the fruit of the promise! Now they are ready, and the Lord appears to Joshua as “the Captain of the host of the Lord.” God Himself came to lead the spiritual conquest. This is none other than our Lord Jesus….and it happened on the very morning of the Feast of Firstfruits (literally resurrection morning!). Immediately they march to Jericho (“the place of the curse”) and proceed to follow the Ark in specific obedience and faith….and after seven days of faith the walls fall down!!…