When I was a boy I remember having a close call with a snake. My friends and I were running along the shore of a pond and I was stopping from time to time to hurl sticks into the water. As I was frolicking along, I reached down to pick up a sizable one that would make a good splash. I wasn’t looking too closely at the stick until my fingers were inches away. Suddenly my brain sent me an alert: “DON’T TOUCH THAT–IT’S MOVING!” I realized that this “stick” was actually a big black snake that had slithered across my path. I sprinted away; a narrow escape!

This disturbing topic of snakes points us back to an episode in the book of Numbers. As the Israelites wandered in the wilderness they again became rebellious. The text records,

“Then they journeyed from Mount Hor by the Way of the Red Sea, to go around the land of Edom; and the soul of the people became very discouraged on the way. And the people spoke against God and against Moses: ‘Why have you brought us up out of Egypt to die in the wilderness? For there is no food and no water, and our soul loathes this worthless bread'” (Num. 21:4-5).

They spurned God’s gracious provision (the manna), and rejected His appointed leadership (Moses). Since the wages of sin is death (Rom. 6:23), God judged their rebellion. “So the LORD sent fiery serpents among the people, and they bit the people; and many of the people of Israel died” (Num. 21:6). (The Hebrew dictionary suggests that the “fiery” nature of these creatures was due to their color or the burning venom of their bites.)

This affliction brought the Israelites to repentance:

“Therefore the people came to Moses, and said, ‘We have sinned, for we have spoken against the LORD and against you; pray to the LORD that He take away the serpents from us.’ So Moses prayed for the people” (Num. 21:7).

Note that the people were not to pray to the image or even touch it; idolatry was forbidden. This act of looking to the bronze serpent was an expression of absolute faith in God’s merciful provision.

We recognize this episode from Christ’s conversation with Nicodemus in John 3:1-10. Jesus instructed this self-righteous Pharisee, “Most assuredly, I say to you, unless one is born again, he cannot see the kingdom of God” (John 3:3). The requirement to receive this spiritual rebirth is faith. Jesus illustrated God’s provision by alluding to the account in the book of Numbers: “And as Moses lifted up the serpent in the wilderness, even so must the Son of Man be lifted up, that whoever believes in Him should not perish but have eternal life” (John 3:14-15).

Why the bronze snake? Bronze typified God’s judgment.[1]. God must judge sin, yet He longs to be gracious. The solution? A substitutionary offering. Christ was judged in our place (1 Peter 3:18). The Old Testament sacrifices could not remove sin, but they covered sin until Christ paid for all sin at Calvary (Rom. 3:23-26; Heb. 10:1-10). As the serpent was cursed in the Garden at the fall (Gen. 3:14), so Jesus bore our curse for us. The New Testament declares, 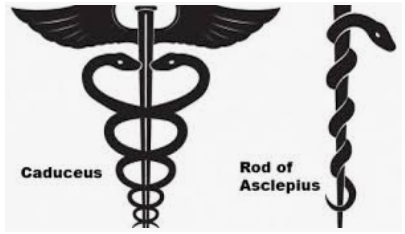 The staff of Asclepius, the Greek god of healing, was a later mythological expression of the event described in Numbers 21. The staff, entwined by a single snake, was part of the crest of the U.S. Surgeon General’s office in the 19th century and is still used as a symbol by various medical services.

A similar medical symbol is the Caduceus–the wand of Hermes, which holds serpents and wings. The Greeks may have borrowed this imagery from the historical event of the upraised bronze serpent of Moses. Was the Biblical event a myth? No–all Scripture is infallible in whatever it affirms (John 10:35).[2]

We, like the rebellious Israelites, were afflicted by the “snake bite” of original sin. As Romans 5:12 says “Therefore, just as through one man sin entered the world, and death through sin, and thus death spread to all men, because all sinned” (Rom. 5:12). Was the antidote philosophy? Good works? Sacraments? No. Just as the smitten Israelites could only look in faith to God’s provision, so we must look to Christ by repentance and faith to receive spiritual healing. “For by grace you have been saved through faith, and that not of yourselves; it is the gift of God, not of works, lest anyone should boast” (Eph. 2:8,9). Anticipating the Cross, Christ predicted, “Now is the judgment of this world; now the ruler of this world will be cast out. And I, if I am lifted up from the earth, will draw all peoples to Myself” (John 12:31,32). Through His death and resurrection Christ defeated our adversary, the devil–the Serpent (Heb. 2:14-15; Rev. 12:7-9).

And as those who have looked to Christ for salvation, we come full circle to realize that God’s provision through Calvary is also the resource for living abundantly.

“Looking unto Jesus, the author and finisher of our faith, who for the joy that was set before Him endured the cross, despising the shame, and has sat down at the right hand of the throne of God.”(Heb 12:2).

“As in Adam we died out of the life and will of God into sin and corruption, so in Christ we are made partakers of a new spiritual death, a death to sin [which brings us] into the will and the life of God. Such was the death Christ died; such is the death we are made partakers of in Him. To Paul this was such a reality that he was able to say, ‘I have been crucified with Christ; it is no longer I who live, but Christ lives in me; and the life which I now live in the flesh I live by faith in the Son of God, who loved me and gave Himself for me’ (Gal 2:20).”[3]

God’s remedy for the lost person and the struggling saint is the same: look and live!

[1] For example, the altar of burnt offering outside the temple was made of bronze (2 Chron 4:1)

[2] We also have an historical footnote: Hezekiah had to get rid of that snake Moses made, because the people burned incense to it! (2 Kings 18:4).